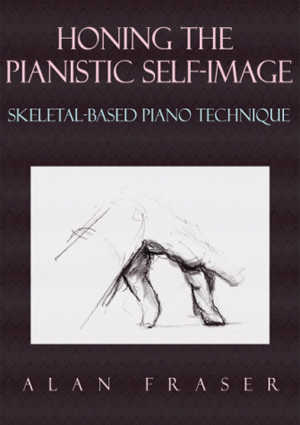 Alan Fraser's sequel to The Craft of Piano Playing.

A Further Evolution in Piano Technique

Where The Craft of Piano Playing focused on the foundational security of the hand's innate structure and function, Honing the Pianistic Self-Image shows you how to take that structure into a new, sophisticated state – unstable equilibrium – to gain an even finer control over the colours and emotion you produce at the piano.

The cutting edge in advanced piano technique that empowers amateurs and intermediate pianists as well.

With these piano exercises you'll acquire an even greater freedom while losing none of your power, whose refinement actually increases through this process of functional evolution. Honing also relates unstable equilibrium in the hand to a similar state in the body, showing how an harmonious whole-body relationship to the field of gravity is a crucial support to the empowered hand on the keyboard.

The structure of Honing the Pianistic Self-Image is similar to its predecessor – explanatory text alternated with practical applications – and the link to the Feldenkrais Method is even clearer here than it was in The Craft of Piano Playing. Near the end of the book, you'll find several full-length Awareness Through Movement (ATM) ® lessons exploring the whole body elements of piano technique.

Honing is not only about piano technique but musicianship as well – 'physical' chapters are balanced out by those dealing with specifically musical issues, where Alan Fraser links the idea of skeletality to rhythm, phrasing, harmonic colour and orchestration.

Sonya Ardan, Alan Fraser's stellar artist from his earlier book, has once again turned her keen eye to sketching his hand in attitudes that evoke not just numerous unexplored possibilities for position but also gesture: the hand in movement.

Although Honing the Pianistic Self-Image was written as a sequel to The Craft of Piano Playing, it stands well on its own and can be used effectively without prior exposure to Fraser's earlier work.